Serbia: birth of a startup nation

Seedcamp held its first ever event in Belgrade on April 5, hosted by the Serbian royal family, no less, at the Royal Compound and attended by the Crown Prince and Princess. The crown prince of startups in Serbia, however, was Vukašin Stojkov. We always need to bear in mind that all good events, and this one was no exception, are organized by great teams, many of whom remain outside of the limelight. However, someone needs to step into that limelight and Vukašin was definitely the man of the hour (or day, or two days… more on that later). 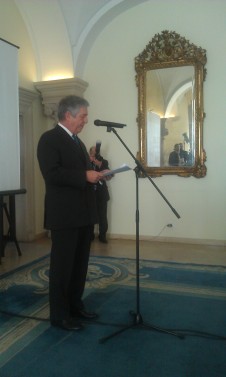 I had the privilege of coming in early and helping the teams prepare, along with Tomaž Štolfa, and later participating in the various roles of feedback provider and panelist. It was great meeting old friends and getting to know new ones. Mrs Spigel and I took to AirBnB and booked a charming little apartment in Skadarlija, Belgrade’s legendary Bohemian quarter. I highly recommend the place for a fantastic combination of price, superb location and comfort. Aleksander, the host, is a great guy.

The projects pitching at the event were very good. One, TruckTrack, has the distinction of having Vukašin himself finally decide to get his hands dirty and jump in as cofounder. It’ll be *really* interesting to see how he juggles his various roles and responsibilities now. As my friends know well, in the “do startup founders need to focus or multitask?” debate I am firmly on the “Focus Focus Focus” side. Vukašin, Stevica, Ivan Burazin, Vibor Cipan – I’m looking at you guys! Another project I *really* liked was PubSonic. Founded by biotech PhD-type nerds, the startup is going to disrupt the field of stem cell research academic publishing. Yes, a niche, and that’s what I always like about a startup. It can’t hurt that the founder, Ivana Gadjanski, is a charming young lady – we need many many many more ladies / girl geeks in startupland.

The next day was Startup Standup day. This was the “graduation” day for participants in the “Startup Academy” training program and it showed. The pitches (a few of which we had seen the day before) were good and up to speed. Knowing how these programs work, I can only imagine what they were like entering the program. Good job, organizers! And huge congratz to Bal Balaji, cosmopolitan serial entrepreneur who is apparently not only “supporting” but, critically, *financially* supporting a lot of the startup activity in Belgrade.

Apart from the startup stuff, Mrs Spigel and I enjoyed our weekend in Belgrade with some good friends whom we are never able to see as often as we would like. Needless to say, before returning to Zagreb we made our traditional pilgrimage to the Zlatiborac shop, picking up various Serbian delicacies, many of which are unpronouncable and untranslatable (afaik) into English. Don’t bother Googling meanings, trust me: Just print out this blog post, find the nearest Zlatiborac shop when in Belgrade, and hand the lady this list: “Duvan čvarci, blagi i ljuti ajvar, kajmak, goveđa pršuta, paprike u pavlaci.” Unless you happen to be vegan, in which case you can skip this assignment and continue to stroll around town.

[SHAMELESS PLUG: Subscribe to the EuroGeeks newsletter to get these posts ahead of everyone else!]

Well… back to Zagreb on Sunday and back to Serbia on the following Friday – but this time headed for Novi Sad or, more precisely, to the Ceptor resort in the rolling hills of Fruska Gora, just outside the capital of Vojvodina. The idyllic forest retreat was built by the government and, I’m told, is still publicly managed. In any case – an awesome place for a startup event. So… in this green environment who should I find but the familiar Pioneers (Vienna) faces, spreading the Startup Live series of events yet further. I have nothing but respect for this project, as it has helped spread the startup virus far and wide.

The coolest of settings for a mentor session

Most of the heavy lifting in terms of organization and logistics, of course, is done by local teams. Katarina, Ivan, Dragan and their team were superb hosts. Mentors came in from the neighborhood – Vienna, Zagreb, Ljubljana, Sofia… Again, a group of interesting projects, some of whom have strong potential. As is usually the case with “weekend” events, some of the projects were at a very early stage with founders not completely clear with what they really wanted to do and how exactly this would work out. But that’s fine – it’s part of the normal startup dynamic and ecosystem. A project that really caught my attention had nothing to do with IT, Web, mobile, social networks or anything digital whatsoever for that matter. A group of three technologists has developed a process to produce bricks out of – ash! Millions of tons of ash, of varying degrees of toxicity, need to be stored all over the globe, mostly in landfills. This project creates bricks out of ash, locking the toxic substances permanently / chemically into the material. The bricks are vastly cheaper to produce and have massive positive influence on the environment. I’m not an expert on this stuff but these guys might be kings of the global construction industry if things work out right. If they do, I’ll be able to say I was “present at the creation” of the project. By the way – they have been working on this for 8 years!

“Present at the Creation” was my overall feeling after these two weekends. We all know the Serbian economy and politics is … well.. challenged. After the Startup Standup event I ran into a political meeting in the center of Belgrade where harsh words were blasted into the streets over the sensitive issue of Kosovo. “Wow – two Serbias!” I thought. Needless to say, we have a ton of issues with the economy and politics in Croatia as well. Startups are the best way for the most talented amongst our younger generations to create their own future, regardless of whether they stay in the region or take off to London or the Valley.

Driving back home from the idyllic forests of Fruska Gora, a tune kept going on and on in my head. It wasn’t the famous singer from Vojvodina, Djordje Balasevic. It was Michelle Shocked and her “Memories of East Texas“…

What a fantastic and exciting experience to be involved with the early stages of the development of a startup community in the ‘hood. Startups from neighbouring countries, the whole New Europe region and worldwide need to pay attention – some hot shit is coming out of Serbia.

§ One Response to Serbia: birth of a startup nation

You are currently reading Serbia: birth of a startup nation at EuroGeeks.